Focusing on an ongoing 17-year perfect safety record, advanced mining equipment and technology and environmental responsibility, the company is seeking support from the local community to promote its plans for the future.

USG is proposing to expand its current operation through the purchase 580 acres of land with mineral rights adjacent their existing quarry in Alabaster. The property would be purchased from the State of Michigan, and proceeds from the sale will be used to support the Department of Natural Resources (DNR) conservation efforts, according to the company.

Plant Manager Matt Craig welcomed guests by showing a brief video presentation outlining the history of the company, its contributions to the local economy and its plans for the future.

George Gentges, a 29-year USG employee, guided visitors on a bus tour of the quarry operation. He touted his company’s adherence to industry safety standards and Michigan Department of Environmental Quality (MDEQ) regulations, as well as the stability of being employed by USG.

“There have been no layoffs, and it’s not seasonal,” he said.

Gentges showed visitors the company’s $1.4 million mining machine in action. Manufactured in Germany by Wirtgau, the mining machine cuts into the ore at a precise depth, and eliminates the need for a crusher or for blasting, except for water control, according to Gentges.

Gentges also stressed during his tour that the company takes care of the environment, as the property is “restored to its natural state,” when mining operation is completed. “This will be wetlands when it’s all done,” he said.

Gentges added that wildlife, including bear, lynx, deer and coyote, have all returned to the restored property, and that a free fishing weekend was recently hosted by the company at one of the lakes formed as a result of the company’s activities. 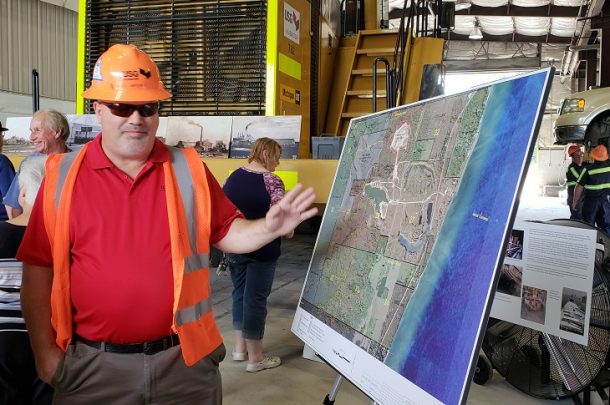 The company says that when the current supply of gypsum is depleted, a new quarry must be opened. They believe that the proposed purchase of land “will keep the Alabaster operation supplying Michigan businesses and industries for decades to come.”

USG, in its materials handed out at the open house, suggested that the community should support this proposal because: